A Korean Pilgrimage to the Russian Far East

An old man and a young girl from the Koryo-saram minority. Picture by Viktor An.

The remoteness already resides in the name of the Russian Far East. The region sounds as if it is half-vanishing in a remote distance outside of our perceptions. And yet, it is close to the hearts of those whose collective memory is rooted there: The Koryo-saram, or the half-a-million Russianized minority of ethnic Koreans living in the countries of the former Soviet Union.

In September 2017, a group of Koryo-saram scholars went to a desolated area full of overgrown nothingness and a few ruins, located hours of a bus ride from Vladivostok. Almost no trace of the former settlements from the late 19th century to 1937 remained. These places used to carry Korean names like Suyfun or Chykchzhonchzha or Tobiche; now even these are on the verge of oblivion.

Just before the trip, the participants had discussed whether those Koryo-saram who survived the Stalinist deportation in 1937 were to be called ‘victims’ or ‘heroes’. All felt that they had somehow participated in deliberate ‘historical politics’, seeking to re-writing a narrative for a purpose of strengthening one’s group identity.

But the trip to the abandoned pre-deportation settlements near the North Korean border left everyone mute. Nothing was to be seen; the whole area was distressingly empty, forsaken, lonely – just a cold, Northern grassland with nothing in sight but a few abandoned mills – and yet, everyone suddenly felt something like a ‘home’.

Some of the participants were Uzbek Koreans, feeling distinct from their Kazakh counterparts; others came from Siberia and exhibited a behaviour that visibly differed from the ‘new Moscow Koreans’. A few even lived in Western Europe, and only seemed to share a primordial kinship (and the Russian language) with the rest of the group. And yet, they all come to gather together in this place of ‘homeland’, located in a wasteland between their primeval region of origin and their current residences. It is as they followed the old, Confucianist custom of yearning to find the tombs of the ancestors.

All ensuingly understood that they together entered what they had so deeply lacked. The topos of a shared past revealed itself to be visible, tangible, walkable with a sensual immediacy. Close to the Northern part of the Korean peninsula, the former ‘homeland’, which was no home anymore, the Koryo-saram’s true shared past is only located here in the destroyed areas of the Russian Far East, the pre-deportation dwellings of the ancestors – a kind of temporary home which it was not anymore, a Zwischenheimat (‘between-home’) located between the old and new host territories.

The regular pilgrimages to the Russian Far East has become the only physical lieu de mémoire common to all Koryo-saram, regardless of whether they live in Tashkent, or 600 km further away in Bishkek, or in Orenburg at the Kazakh-Russian border or anywhere else, in Vienna, Berlin, London. 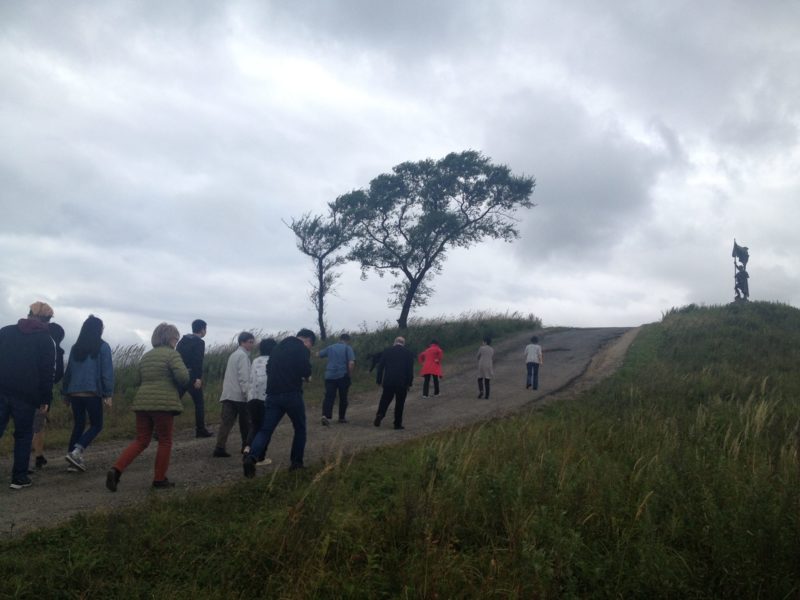 A Koryo-saram trip to the Russian Far East. Picture by Svetlana Kim.

Nearby – in derelict swathes somewhere between Kraskino, Cukanovo (formerly ‘Yanchikhe’, a Korean toponym) and Fatashi – stands a group of monuments, memorials jointly set up by Russia and South Korea in 2001. Somehow clumsily, history politics has entered this materiality: One monument was built to honour the activist An Jung-geun and his eleven compatriots who were involved in an anti-Japanese movement for the Korean independence. A print of his famous hand with the patriotically cut-off finger is placed near fifteen stones which symbolize the fifteen reasons of why Ito Hirobumi, the Japanese statesman, was to be killed by Koreans.

All participants of the trip had their parents or grandparents rooted here – in the geographical space of the Russian Far East. Could they embrace an unknown narrative, embodied in the material monuments, of Korean independence activists with whom they had few in common? Was this the content of the Koryo-saram collective memory?

Memory may have once been understood as a relationship connecting generations with each other; today, it is about nations purposefully encoding messages into a materiality, which is laden with feelings of honour, of sacrifice, calling people to unite and understand an allegedly common past.

After this process of vivid remembrance, after this catharsis, it seemed time to return to each participant’s residence – wherever that was. The next task was to continue debating on historic politics – are we victims or heroes? Regardless of the next discourse that will be purposefully institutionalized, the feeling of having immersed into a sacred territory of an abandoned homeland remained.